Share to:
Sandra Porter
Wednesday, July 25, 2007 - 01:32
Not content with his recent exploits in human experimentation and cavorting with Plosites in San Francisco, Professor Steve Steve jetted across the country once again, last week, hitting both both Blacksburg, VA and Seattle, WA, and creating pandemonium wherever he went. And raising the question - how does he get back and forth across the coast so quickly? Will you find out below? Will you ever find out? Who knows what you'll find out when you see- oh no! what's he doing? Steve! You'll get sunburned! Noooooooo! Steve! Not in front of photographers! 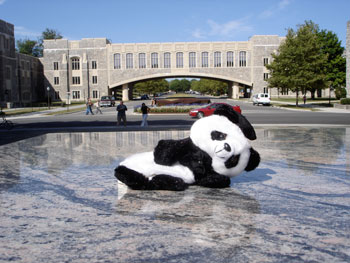 Professor Steve Steve bears it all!

We began the week innocently enough. 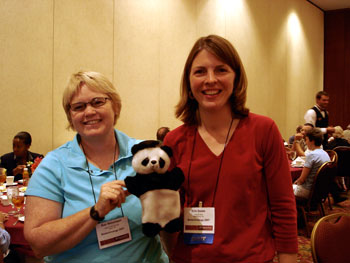 Steve managed to behave himself at lunch, once his stomach stopped growling. Here he is with Dr.'s Erin Dolan and Xan Simonson. 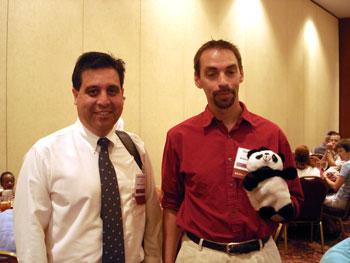 Steve poses with Dr.'s Jesus Valenzuala from the NIH and Zach Edelman from the Fralin Center

Steve! You poseur! He was tame as could be when inside, but when outdoors, Steve went wild. 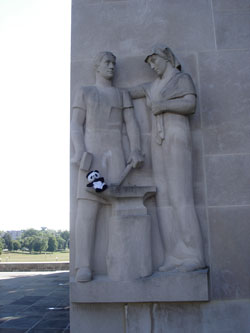 John, I have to talk to you about that panda. Put the hammer down, John. The panda is not going to bite.

And that night, he caused a large hairy ruckus when we were out with the Arizona teachers. Apparently, some ill-informed person told him that pandas aren't bears. Little did they know, genetic testing has proved that pandas are rightful heirs in the family of bears - the Ursidae family, that is. 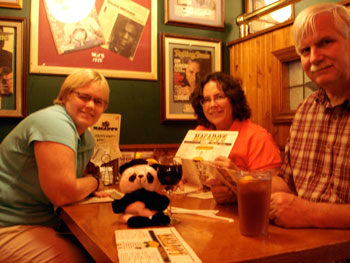 Oh dear, there he goes! "Hey, who's was that saying pandas aren't bears? I can prove it with DNA testing!"
It was all I could do to stop Steve from screaming "So what if my genus is different? It's only my genus! It's only my genus!"

I was forced to shove him under a table and whisper, loudly, "Steve! Stop saying 'genus,' we're not on the internet, we're in Virginia. and they might take it the wrong way! 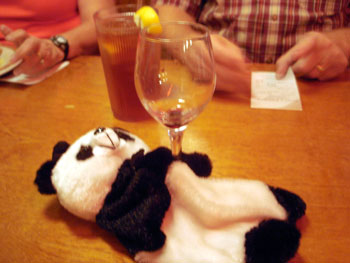 Luckily, we Prof. Steve Steve can be a teddy bear when he's not feeling grizzly.

When we got back to Seattle, Prof. Steve Steve was all smiles. 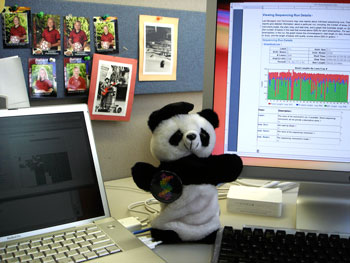 Prof. Steve Steve behaved himself at my desk for awhile once he got over the disappointment of finding out that we don't have lab.

But I promised to make it up to him and take him out for coffee. 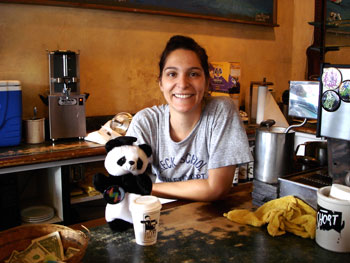 Prof. Steve Steve concluded his Seattle with a visit to Uptown Espresso and learned where to find the perfect Americano.
He pronounced it "beary good." Now I'm a little worried, though, that hanging out at Geospiza gave him a little bit of code. (We are a software company, you know.)

Bye, bye Steve! Have a fun on your next adventure!
Categories:
Evolution
Humor
Science education

Get Molecule World for iPhone!